A whimsical maze of rounded granitic boulders, golden-hued arches, and badland gullies made Lone Pine’s Alabama Hills an ideal backdrop for Hollywood westerns. Filmmakers from the early 20th century loved the way the smooth, weathered boulder piles struck a contrasting pose against a background of jagged Sierra Nevada peaks. This breathtaking juxtaposition of glacially-carved summits and rugged desert geology set the scene for more than a century’s worth of movies and television shows, starting with the 1920 Fatty Arbuckle silent film The Roundup. 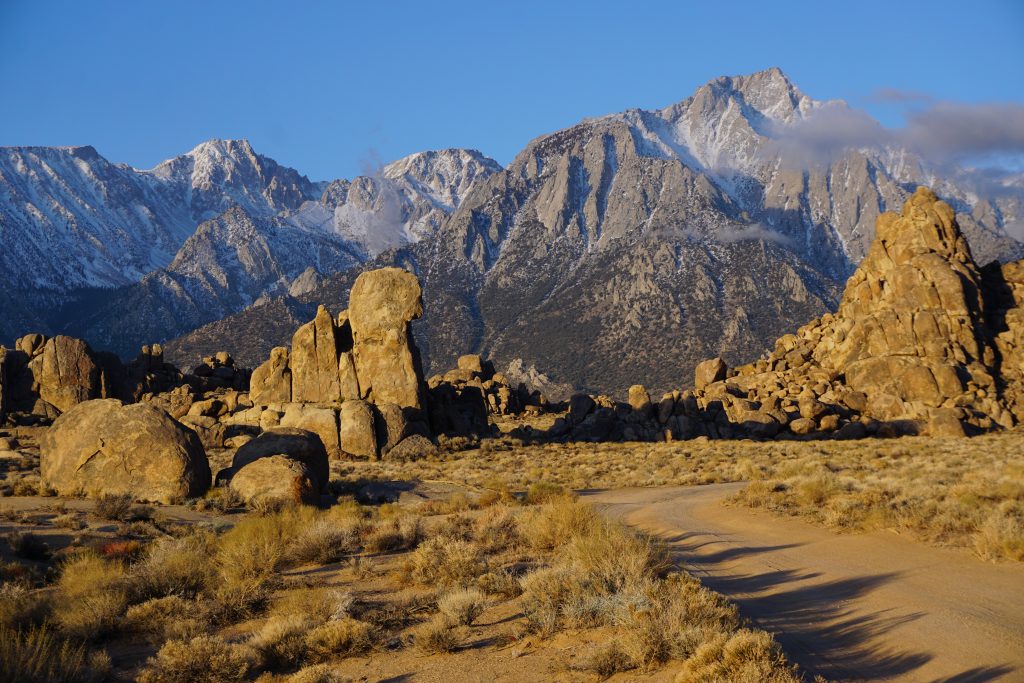 Movie buffs can stop in Lone Pine at the Beverly and Jim Rogers Museum of Lone Pine Film History to pick up the Movie Road Self-Guided Tour booklet (and check out the costumes, saddles, guns, and other Hollywood props). A drive on smooth dirt roads leads to Movie Flat and an assortment of spots where Roy Rogers, John Wayne, Gary Cooper, Humphrey Bogart, and Hopalong Cassidy ambushed outlaws from their craggy hideouts.

Nature lovers and photographers will want to wander more freely in this land of geological contrasts, searching out the perfect spot to frame a photo of 14,505-foot Mount Whitney, tallest peak in the contiguous United States. Pay homage to this mountain behemoth on the Arch Loop Trail, where Mount Whitney is framed within the twisted span of Mobius Arch. The arch is one of dozens of natural arches that can be found amid the Alabama Hills. Close to Mobius Arch are Lathe Arch, Heart Arch, and the Eye of Alabama. Walk to them all in less than two miles. 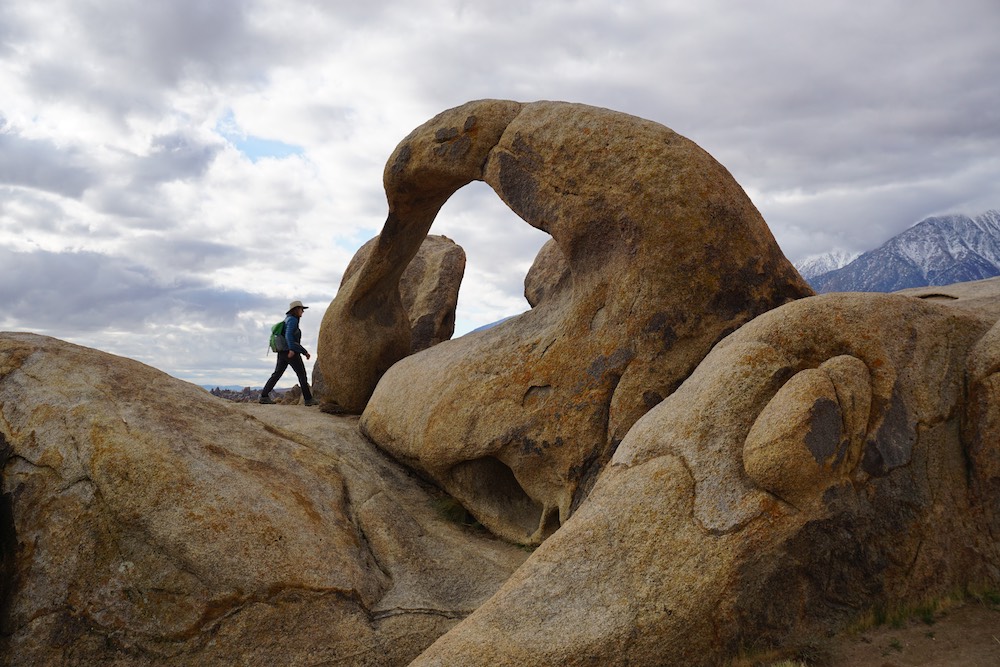 Although the Alabama Hills’ rounded formations look much different from their close neighbors, the Sierra Nevada’ saw-toothed granite peaks, the two were formed by the same forces—a massive uplift of the earth’s crust about 100 million years ago. The formations simply eroded in different ways: the Sierra Nevada was weathered by freezing and thawing, whereas the Alabamas were subjected to eons of wind-blown sand, wearing them down to round and smooth shapes. 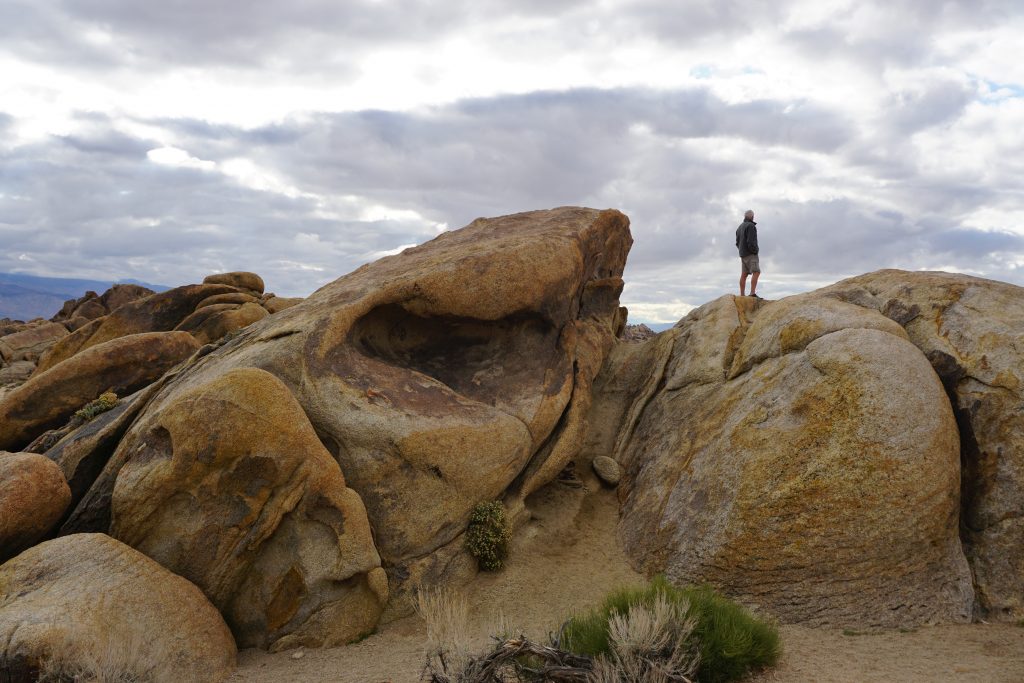 Wildflower fans start arriving here in March and April to seek out a few rare finds among the Mojave asters, Fremont gold, bush sunflower, and scarlet milkvetch. The Inyo County star tulip and Owens Valley checkerbloom can be found near seeps and springs. In some years, the Alabamas’ sagebrush plains showcase the brilliant blue of wild hyacinth, a plant whose bulb was coveted food for the Owens Valley Indians.

Perhaps the Alabama Hills’ oddest feature is its name. The Alabamas bear no resemblance to the southern state. But during the Civil War, local miners who were Southern sympathizers named their mining district after a Civil War battleship, the USS Alabama, which sunk more than 60 Union ships. When the USS Alabama was sunk by the Union ship USS Kearsage, nearby Kearsage Pass and Kearsage Peak were named, so ultimately, both sides of the war were recognized. 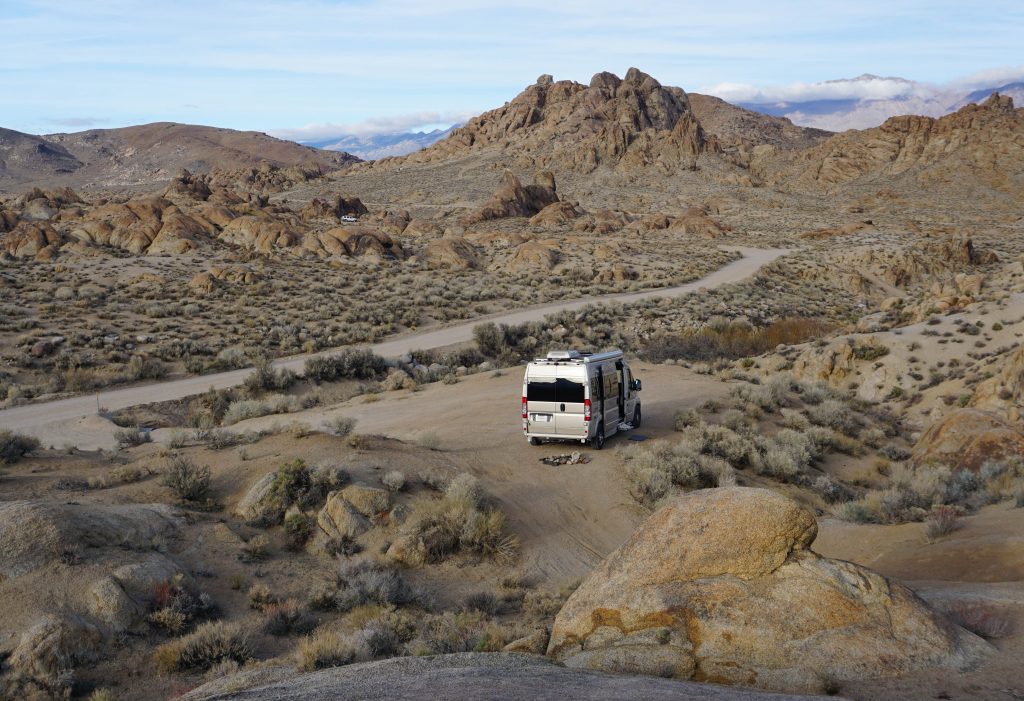 Driving Directions: From US 395 at Lone Pine, turn west on Whitney Portal Road. Drive 2.5 miles, then turn right on Movie Flats Road. The pavement turns to dirt, but passenger cars can make the drive. The Arch Trail trailhead is in 1.5 miles.

Travel Tips: Free, dispersed camping is permitted for up to 14 days in the Alabama Hills. There is no water or facilities; pack in what you pack out. Nearby Tuttle Creek Campground has 80 developed campsites for tents, RVs, and trailers. Sites are first-come, first-served. Motels and restaurants are located in nearby Lone Pine.